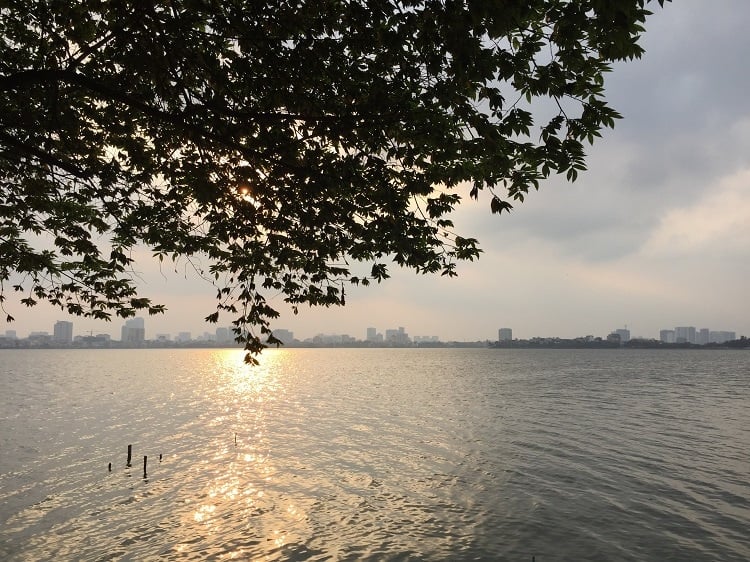 Wondering about the cost of living in Vietnam? I’m guessing you’ve heard a bit about how cheap it is to live here. But just how cheap is cheap? I mean, if you live in San Francisco, everywhere is cheap in comparison. I think I can help provide some context…

See, as someone who’s grown up using the Internet, I have pretty much zero barriers when it comes to personal privacy. And as someone who’s fairly budget-conscious, I diligently track every single thing I spend money on in Vietnam, down to the 5k VND I spend to fill up my motorbike tires.

So, to help you get a grasp on just how much it costs to live in Vietnam, I’m going to share real data on my monthly expenses. I’ll share, down to the penny, exactly how much it costs to live what I think is a very comfortable life as an expat in Vietnam. I track all of these daily on a smartphone app, so it’s pretty dang accurate and broken down into different categories.

For reference, I’m an expat living in Hanoi, Vietnam. Prices in Ho Chi Minh City or Danang might differ a little bit, but the general trends should hold true. If anything, those places might be a little bit cheaper than Hanoi. I know food in Saigon always felt cheaper to me, though I’ve never lived there long term.

Also, I’m from the States, so most references will be the cost of living in Vietnam compared to US. But you should be able to figure out the exact comparison for your situation.

If you just want to skip straight to the tables detailing my exact spending, click the button below. Otherwise, I’ll also break down each spending area in detail before I get into my personal spending data.

What Currency Does Vietnam Use and What’s the Exchange Rate?

Before I jump into the cost of living in Vietnam, I should probably talk about the currency. Vietnamese uses the Dong (!). Its notes range from 200 VND (rare at this point, but I’ve seen them) to 500,000 VND (gets you yelled at by street sellers!).

Right now, the exchange rate is roughly 22,000 (yes, twenty-two thousand) Dong (VND) for $1 USD. So the first time you hit an ATM in Vietnam, you’re a millionaire! Two million VND is less than $100 USD.

All that to say, when I say something like “My apartment costs 7.5 million”, you shouldn’t be alarmed. I ain’t ballin’ that much.

How Much Does An Apartment Cost in Hanoi, Vietnam?

I’ve lived in two different apartments in Hanoi. You can see what my old, cheaper apartment looks like below.

But here’s what kind of apartment $600 gets you in Hanoi, Vietnam:

I love my apartment. It has a massive terrace with a full view of West Lake. And it also has a separate room for my office, which makes it somewhere between a 1BR and a 2BR.

UPDATE – I MOVED. Everything under here applies to my old apartment.

I’ve lived in the same apartment in Hanoi for the past 2 years. I absolutely love it. It’s the perfect bachelor pad. It’s somewhere between a studio and a one bedroom apartment and it’s got everything I need. Kitchen, shower with rainfall showerhead, western styling…the works.

For my apartment, I pay…7.5 million dong. That’s about $330 USD at the time of writing this article. Not bad at all considering I paid $600 for a shared room in Philadelphia.

So what does a $330 apartment look like in Hanoi, Vietnam? Here are a couple shots of my place:

Not the largest space (it’s about 45 square meters), but a perfectly functional bachelor pad. I like it. It’s in the old quarter and easy to get around to most of the areas I like hanging out in.

You can certainly find cheaper accommodation if you’re willing to live with roommates. I know people who spend as little as $150 per month for a room in a share house.

You can also certainly find more expensive properties. I’ve thought about moving into a nice 2-bedroom. That would still only cost $500-600 per month.

And if you want it, there are luxury apartments that can certainly run much more. Especially if you want a beautiful view of West Lake (Tay Ho). Those go from $800 into the thousands.

How Much Does a Motorbike (Scooter) Cost in Vietnam?

It depends on your needs. When I first came here, I bought a 2005 Yamaha Nouvo for 5.5 million Dong, or about $250 USD. I used that bike for over 2 years before I got tired of small things continuously breaking. It never stopped running…but a broken electric starter here, a broken kickstand there…

It got annoying. I wanted a bike I could trust to take on long trips.

So I switched to a brand new Honda bike in 2017. I bought a 2016 Honda Future for ~30 million VND, or about $1,300 USD. Now, you certainly don’t need to buy a brand new motorbike. But if you live here a long time, you will grow to appreciate the reliability.

Whatever you do – never rent. Unless you’re only planning to be here for a month, it almost always makes sense to buy and sell your bike.

As for gas prices…

Gas prices are fairly inconsequential here. To fill up my tank, I usually spend ~60k VND. That’s less than $3 USD! I don’t drive that much because I work from home so I typically only need to fill up 2-3 times a month. For a normal month, I spend less than $10 USD on gas.

How Much Does Food Cost in Vietnam?

Something like hot pot (delicious!) is typically 100-125k ($4.50-$5.50) per person and will leave you completely stuffed to the gills with delicious food.

If you want good Western food, you’ll definitely spend a little more. Though for the quality, it’s still cheaper than my hometown of Philadelphia. Here are the prices for delicious food at some of the places I like:

So if you go out for a Western meal and have a few drinks with your food, you’ll probably spend like $10-$13. Definitely not as cheap as eating Vietnamese food, but also far from breaking the bank.

And here’s the really cool thing about food in Vietnam:

There are meal delivery services which are super duper cheap. Because I hate cooking (and like taking advantage of cost of living arbitrage), I use them for all of my meals at home. I pay 45k VND ($2) per meal for a healthy meal of chicken, vegetables, and brown rice. It’s kept me healthy and gives me more free time by eliminating the need to cook.

It’s one of my favorite parts about living in Vietnam.

How Much Does a Beer Cost in Vietnam?

Ahhh, the important question. I should’ve put this first. If you’re willing to drink like the locals, beer is crazy cheap in Vietnam. You can get bia hoi (watered down draft beer) for as little as 5k VND. That’s less than 25 cents.

If you want a bottle of basic Vietnamese beer, you’ll typically pay between 15-25k VND (75 cents – $1.25) depending on your location. Classier bars might run more expensive. E.g. a popular club in Hanoi charges 60k VND for a Tiger beer.

Craft beer isn’t popular in Vietnam, but it does exist. And some of it is actually pretty tasty. If you want craft beer in Vietnam, you’ll need to pay, though. Craft beer typically runs about 95k, which is a little under $5. So not nearly as cheap. But sometimes you want something that’s not a lightweight lager!

How Much Does Coffee Cost In Vietnam?

While you can find dirty cheap coffee for 10-15k a cup, you’re better off spending a bit more for the better stuff. Even the good coffee is cheap at ~25-30k per cup.

How Much Does Cell Phone Service Cost in Vietnam?

Data plans for your cell phone are stupid cheap in Vietnam. Seriously. I pay 70k VND, or $3.50 USD, per month for unlimited data. It’s insane. I get 600 MB fast data and then the rest is speed-throttled, but that doesn’t really bother me.

I use Facebook voice chat instead of phone calls (that’s very common here), so that $3.50 is pretty much my only monthly expense for cell phone service.

Other Miscellaneous Expenses in Vietnam.

These don’t really deserve their own category 🙂

How Much Do Gyms in Vietnam Cost?

On the other hand, luxury gyms like Elite Fitness and California Fitness run close to $100 per month. They’re super nice – I did a trial at Elite Fitness and thoroughly enjoyed a few days of luxury. But it was double what I paid for a gym back in America.

So, if you can handle basic, gyms are cheap. If you want luxury, be prepared to pay.

I also spend a decent bit on whey protein every month. Whey protein is widely available in major cities in Vietnam, but at a significant markup to what you’d pay in Western countries. I pay ~$100 for 5KG (11 pound) bag of MyProtein Impact Whey.

How Much Does Health Insurance Cost in Vietnam?

If you’re living in Vietnam, you absolutely need health insurance. Don’t be a dummy. Thankfully, it’s much cheaper than back home in America (no comments about universal healthcare, please). I pay about $500 per year for a policy through a Vietnamese insurance company (Bao Viet).


Cost of Living in Vietnam: What Do I Spend?

Ok, now that I covered the basics. I’m going to share exactly how much I spend each month. This includes most of my expenses. Pretty much the only thing excluded from these tables is:

I moved to a more expensive apartment. Now, my monthly budget is 25 million VND, which comes out to about $1,100 USD.

I’m not super strict with my budget, though. For example, I’ll never say no to a night out with friends because it costs too much.

Ok, here’s my cost of living for Hanoi, Vietnam:

October 2017 was my first full month in my new apartment. Because the rent is a good bit higher (and I also need to use more aircon because of all the sunny lake view windows), my expenses went up a good bit. My new goal is to stick under $1,100 per month.

In May, my girlfriend moved in with me so she chipped in for the rent a bit. I also bought a 5kg bag of whey, which pretty much offset what she chipped in. Other than that, it was a fairly normal spending month for me.

April was, again, a fairly standard month. I guess I wasn’t feeling drinking very much this month because I didn’t spend a single cent at bars! Though that might be a little misleading because I usually count Bia Hoi as eating out instead of bars unless I exclusively drink beer.

March was a pretty standard month for me. I worked a lot, so my outside time was limited. I ended up coming in well-under budget despite not really trying to cut any spending.

February 2017 expenses were a little higher than normal because I bought a new 5KG bag of whey. That alone accounted for 2.3 million VND, or about $100.

Otherwise, February was a fairly typical spending month for me.

Have any questions about the cost of living in Vietnam? Leave a comment and I’ll try to help out. At the time of writing this post, I’ve been living in Hanoi, Vietnam for over two years. So I think I have a pretty good grasp on pricing.

49 thoughts on “Cost of Living in Vietnam: How Much Does it Cost to Live in Hanoi, Vietnam?”