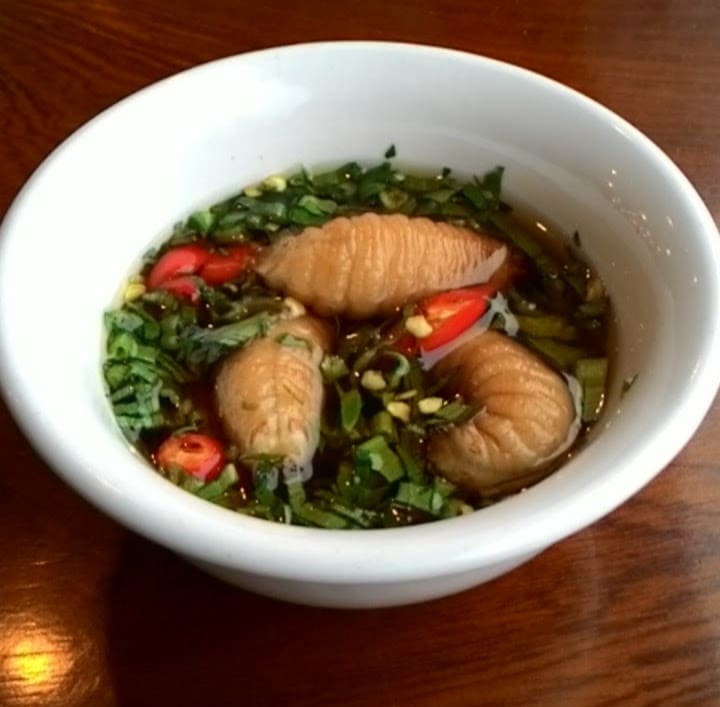 I was a picky eater when I lived in America.

Then I moved to Vietnam, where the culture took a sock full of pennies to every picky bone in my body.

In America, I felt woozy when I saw blood on my de-boned chicken breast.

In Vietnam, I eat raw blood pudding and stare uncooked blood cake in the eye at dinner:

I guess what I’m trying to say is — before I moved to Vietnam, I never thought I’d find myself staring at this:

Yeah. Those are coconut worm larvae, or đuông dừa in Vietnamese.

And that picture doesn’t do them justice. Because it’s static. If you look at that picture, you can imagine they’re dead and lifeless in that little bowl. You don’t see them stomach-churningly undulating around the bowl.

Even for my broken picky bones, this was too much.

But, like many things in life, I was doing it for a girl. See, months earlier I’d promised her that we would do this when we were both back in Vietnam. Yes, of all the things to do in Hanoi, she wanted to eat friggin’ coconut worm larvae.

Let’s be honest, would you ever imagine someone would remember a three month old promise to eat live coconut worm larvae? All along, my plan was not for this to actually happen.

Yet there I was at the restaurant…staring at a bowl…filled with three very alive, very active, very disgusting-looking coconut worm larvae.

And because doing something for a girl brings out the enthusiasm in me, I went first.

Let me tell you – here’s what you’re not expecting when you go to eat a live coconut worm larva:

The movement as it writhes between your chopsticks.

See, I had girded myself for the moment where I bit into the larva. It terrified me, but I was ready. What I wasn’t prepared for, was just how very alive the larva felt between my chopsticks.

So, with as much speed as I could safely muster, I quickly stuck it into my mouth and bit down. And it exploded. Like those old Gusher candies you had as a kid.

And you know what? Texture aside – it didn’t taste that bad. Most of that was a result of the salty sauce it was sitting in. But I really couldn’t complain.

After a quick washdown with a Hanoi beer, I was good as new.

I don’t think I’ll be doing it again, but I emerged unscathed.

You can view live documentation of my experience below. And scroll to the end of the post for information on where you can find coconut worm larvae (AKA đuông dừa) in Hanoi.

Apparently coconut worm larvae are technically banned in Vietnam. But, as with most “rules” in Vietnam, that doesn’t mean you can’t find them.

My girlfriend (who is Vietnamese) googled around and we eventually settled on this place:

If I recall correctly, each larvae cost 25k VND, or a little over $1.

It’s not on the menu, so you’ll need to ask the wait staff for help.

Also, my friend told me later that you’re supposed to bite off the sharp head on the larvae before chewing, as it can cut your mouth. I personally didn’t have any issue (though I did feel the sharp part), but it’s something you might want to be aware of.

8 thoughts on “That Time I Ate Coconut Worm Larvae in Hanoi, Vietnam (and Where You Can Too)”